Whenever and wherever there is a decline in religion and the rise of irreligion the Lord appears millennium after millennium.
When the Lord comes to this world he doesn’t take birth like ordinary human beings but appears out of His own sweet will. Whenever there is a need for the protection of devotees the Lord appears. The Supreme Lord incarnates in many forms like Matsya the fish, Varaha the boar, Narsimha the half man half lion. All these forms of the Lord are very attractive to His devotees who take great pleasure in talking about his pastimes.
One such famous incarnation of The Supreme Lord is Lord Rama. The birth of Lord Rama is celebrated as Rama Navami. Lord Rama was born to King Dasharatha and Queen Kausalya in Ayodhya. He had three younger brothers Bharata, Lakshmana and Shatrughna.

The Ramayana narrates the history of Lord Rama – the great King, Husband, ideal Son and Master.
Lord Rama was an ideal son. He always obeyed his father and had great respect for his mothers.
He was a perfect King and ruler. Lord Rama ruled for 14,000 years. His reign till today is called Rama Rajya. When Lord Rama was ruling his people there was no famine in his kingdom, no scarcity of food and no disease ever affected anyone. The people in his kingdom had a strong bond of love with Him. They lived only to serve and please Him.
He was very strict with troublemakers and punished them when necessary. He was handsome, strong, brave, chivalrous, fair, just, gentle, sweet, kind and always merciful to His devotees and all the citizens.
The festival of Ram Navami marks the birthday celebrations of the Supreme Lord Sri Rama. According to the ancient Vedic calendar, it falls in the Spring season. It is considered auspicious to undertake a fast on the day in the name of Rama. Devotees perform elaborate worships and chant the name of Rama. Temples of Rama decorated with flowers, leaves and have special services and bhajan sessions throughout the day. Stories from the Ramayana are read out in joyous public gatherings. Most people fast until midnight.

One significant and popular element of the celebration is the Ramayana parayana, a discourse on the Ramayana, by a devotee of Lord Rama. It usually lasts nine days, beginning on Ugadi and ending on Rama Navami. The main significance behind the celebration of this festival is that the character of Lord Ram signifies an ideal son, an upright husband, a righteous King, and a loving brother and an ideal person, someone who follow the right path against all odds in life. He was also the true embodiment of humanity. So celebration of Ram Navami is a special way to remember all the noble deeds performed by Lord Ram. So in true sense it is not only a festival to enjoy and have fun but also an occasion where lot of ideals can learnt and taught. It is a celebration of goodness and its victory against all evils. Sacred places associated with Rama, like Ayodhya, Ujjain and Rameshwaram, draw tens of thousands of devotees. In Rameshwaram, thousands take a holy bath in the sea and worship lord Rama. Many places in North India host fairs in connection with the festival, culminating in spectacular fireworks on Rama Navami.

The birthday of Sri Rama, indeed, signifies an event worth of remembrance by everyone who cherish the time honored sublime values of human culture and civilization. Devotees stay awake on the ninth night, in anticipation of Lord Ram’s birth. A Yagna is 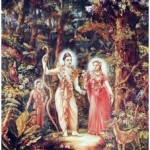 performed and they sing devotional songs in praise of Lord Rama and rock his image in cradles to celebrate his birth. A special worship is performed the next morning as a token of gratitude for His mercy. Ram Navami is a festival of celebration and brings its devotees true happiness and joy. It gives them the strength and courage to fight against all odds of life.

Rama means ‘bliss’ and so Lord Rama provides bliss to all those who remember Him and pray to Him. Therefore let us all remember the activities and instructions of Lord Rama; follow them and achieve happiness.

Video limit- send a video (max 2min) of the kirtan